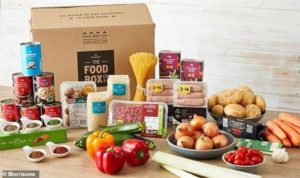 Supermarket giant Morrisons has put together a £30 box of food to feed a family of four.

The box also comes with recipes.

The meals include chilli con carne, spaghetti meatballs, and a vegetable curry.

Winter warmers like sausage and butterbean bake and cheesy leek and mushroom pie are also suggested.

All the ingredients are shop-size – meaning some could be left over for further meals.

“Many of our customers enjoy eating meals as a family and we have seen customers do this more during the pandemic.

“It can be difficult to constantly cook up new dishes that please everyone.

“So, we wanted to create a great value box that contained high-quality produce and recipe cards – to make it easier to try new things.”