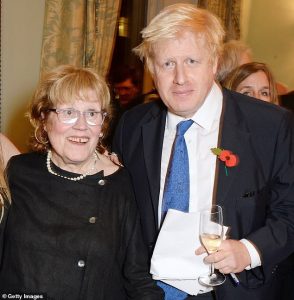 The mother of Prime Minister Boris Johnson has died.

She died “suddenly and peacefully” at a London hospital.

A death notice was issued in The Times.

Ms Wahl was diagnosed with Parkinson’s Disease at the age of 40.

Mr Johnson described her as the “supreme authority” in his family.

The PM’s son Wilfred was her 13th grandchild.