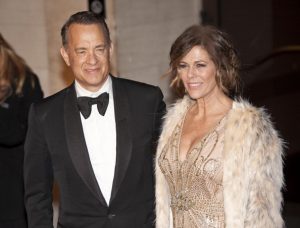 The 63-year-old Hollywood icon is filming in Australia when he revealed the illness.

In a statement he said:

“Hello, folks. Rita and I are down here in Australia making a film about Elvis Presley.

“We felt a bit tired, like we had colds, and some body aches.

“Rita had some chills that came and went. Slight fevers too.

“To play things right, as is needed in the world right now, we were tested for the coronavirus, and were found to be positive.

“Not much more to it than a one-day-at-a-time approach, no?

He added that he and his wife “will be tested, observed and isolated for as long as public health and safety requires.”

Hanks is playing the role of Colonel Tom Parker, Presley’s eccentric manager who groomed the famous singer to stardom in the 1950s.

The film is being directed by Oscar winning Australian Baz Luhrmann.