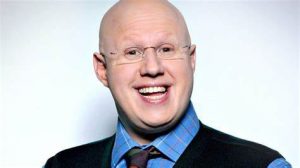 Comedian Matt Lucas is to replace Sandi Toksvig as the presenter of The Great British Bake Off.

Ms Toksvig surprisingly announced she was quitting the last in January.

Lucas is best known for his sketch shows Little Britain.

He’s also played in Doctor Who, and Alice in Wonderland.

He will work alongside fellow presenter Noel Fielding and judges Prue Leith and Paul Hollywood.

In a statement, Lucas said:

“I’m chuffed to bits to be joining the most delicious show on television. I can’t wait to break bread with Noel, Prue and Paul and meet the brilliant bakers.

“And bearing in mind my love of cake, I’ve already ordered some much larger trousers in anticipation.”