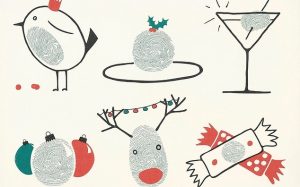 M16 has sent out Christmas cards with microscopic messages hidden in “fingerprint” whorls in the design.

The card has all the Christmas trimmings – a robin, a tree decoration, and a Christmas pudding.

There’s even a glass of Martini – shaken not stirred.

Buried deep inside the “fingerprints” are clues which will help identify who send the card. 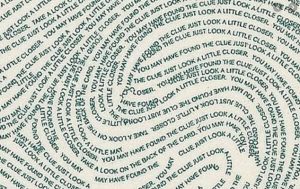 The Christmas cracker’s clue is: “Try the robin, just a cracker, no joke.”

Having gone to the robin picture, the tiny writing – not visible to the naked eye – reads:

“Unfortunately, I’m not the message. Try looking at the plum pudding.”

The clues go round and round – pushing the reader towards the olive in the glass.

But James Bond’s Martini favourite tipple is a dead end:

“I’m a red herring. Try something else”.

The ever-dwindling spiral of clues finally leads the reader to the answer:

“Wherever you are in the world, have a wonderful Christmas and a prosperous New Year.

“From your friends in the Secret Intelligence Service.”

“We’re secretly just like you and our people work secretly around the world to make the UK safer and more prosperous.

“We are creative and determined – using cutting-edge technology and espionage.”