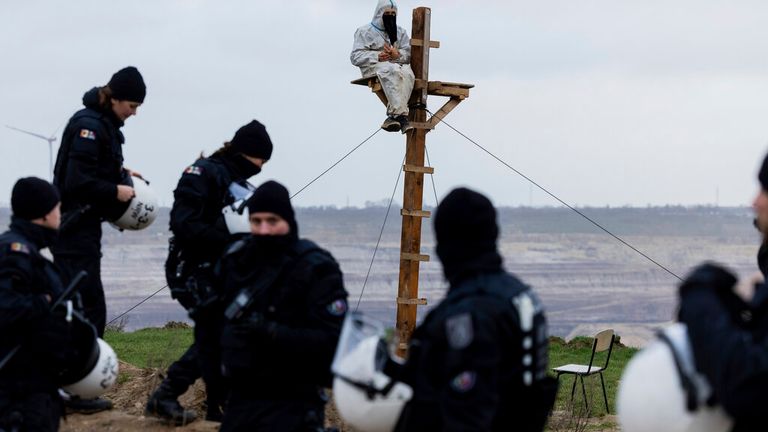 As police prepare to expel them, environmental activists who occupy a German village that is being swallowed by a coal mine have pledged to fight back.

As the original inhabitants of Luetzerath, west Germany, have been gradually abandoning it, they are now planning to demolish it to make room for an extension to Garzweiler II’s lignite mine.

Only a few hundred metres from the large pit in which RWE, a German utility company, extracts lignite coal for nearby power plants is the village of Saxony.

The fate of this village is a reflection on the larger debate about Germany’s attempts to wean itself from coal by 2030 amid the gas crisis.

Two years ago, environmentalists moved into the homes of the former residents to warn that coal could release millions of tonnes of harmful air pollution and climate-heating carbon dioxide.

LuetziBleibt, which means Luetzi Is Staying, claimed that “around a few hundred people” are currently living in the village. It expects more to join them over the weekend.

Johanna Inkermann, spokesperson for Luetzi Is Staying, stated that the coal should be kept in the ground as it is a threat to human civilisation.

“With climate catastrophe already here, already severely affecting people in Global South, and who have not caused it,” she said to Sky News via phone from the camp.

The Heinsberg county administration gave the police permission to expel the occupiers on Tuesday, 10 January. To stop more people joining, activists expect that police will begin by fencing off the village.

Ms Inkermann vowed, “We will certainly not be moved.”

The German government stated last summer that it had to use additional coal power as a “bitter, but necessary” move in order to fill the void left by the Russian gas cut off under President Vladimir Putin.

Ministers are looking at ways to increase clean power. They aim to generate 80% of the country’s electricity from renewables by 2030.

RWE and the ministry for economic affairs and climate change were not available for comment immediately. However, RWE stated last year that the war in Ukraine had increased the importance of having a reliable supply of lignite coal to power plants.

According to one study from the German Institute for Economic Research, (DIW), the lignite coal beneath Luetzerath wasn’t needed for German power supply in order to avoid Russian gas.

She stated that it wasn’t the responsibility of the group to find alternatives but to stop expansion of the mine in order to protect people from the effects of climate change.

She said that the “climate disaster doesn’t wait for the problem to be solved.” We don’t have the time to continue burning coal, we must manage multiple crises simultaneously. It’s possible.