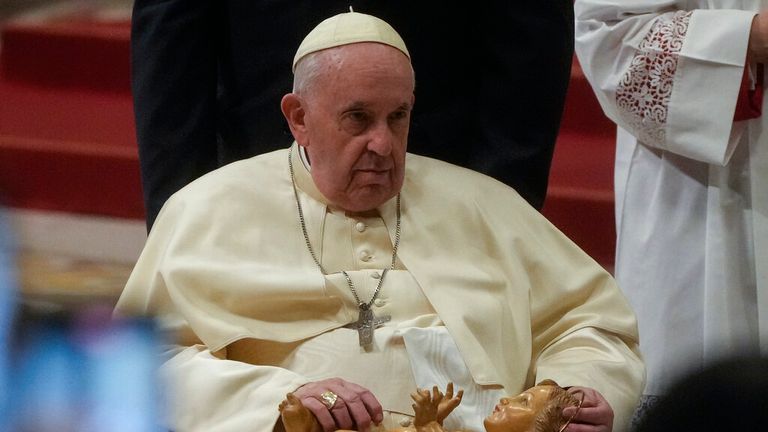 The Pope used his Christmas Eve Mass to condemn those who seek wealth and power, and also decry war and poverty.

He said, “While animals eat in their stalls,” and that men and women around the world, in their quest for wealth and power, consume their neighbours, as well as their brothers and sister.”

“How many wars has this country seen?” How many times are freedom and dignity treated with contempt in the world today?

He said, “As always the main victims of this human greed sind the weak and vulnerable.”

He said, “This Christmas too, as in Jesus’ case, a world hungry for power, money and pleasure doesn’t make room for the small ones, for so many unborn and poor children.

“I think most of all of the children who are ravaged by poverty, war and injustice.”

He asked the people gathered not “to be overcome by fear, resignation, or discouragement”, adding that “so much consumerism…has packaged the mystery of Christmas that there was the danger that the day’s meaning might be forgotten.”

The Pope stated that Jesus was born poor, lived in poverty, and died poor. He also said: “He didn’t so much talk about poverty, as he lived it, right to the end for our sake.”

He asked the congregation to do something good this Christmas, and he ended his remarks by asking them to “not let it pass without doing something.”

Pope Francis was pushed into a wheelchair and carried a statue representing the baby Jesus. He was surrounded by children with flowers.

He placed the baby inside a Nativity Scene in the basilica.

The Pope, who is 86 years old, used a wheelchair to travel longer distances while using a cane to get shorter distances.

His traditional Christmas Eve mass was at midnight. However, it was moved to 7.30pm in order to allow the congregation to return home before the COVID-19-enforced curfews.

Despite the lifting restrictions, the Vatican has maintained the earlier start time.

Pope Francis will give another Christmas Day address, in which he will discuss world events and offer a blessing.

The Christmas Day address, also known as Urbi et Orbi in Latin (to the city or to the world), is often viewed as an opportunity to reflect on crises such as war, persecution, and hunger.