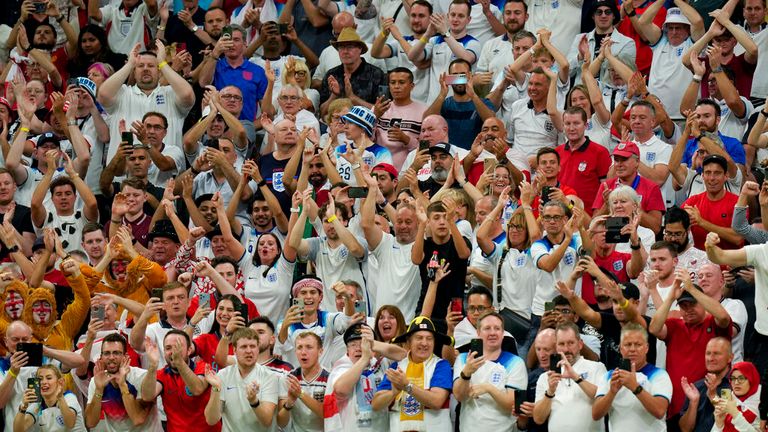 A few England fans could be heard singing “It’s coming home” in Doha’s West Bay District streets well after 3 AM.

It was a strange sound for a capital that is not used to late-night rowdiness.

The Three Lions are now used to reaching the quarter-finals of tournaments.

It’s now three consecutive under Gareth Southgate thanks to Sunday’s 3-0 win over Senegal at Al Bayt Stadium about 30 miles from Doha.

Talent and ambition finally live up to expectations.

France is the only country that stands in the way of France’s fourth-place finish.

Southgate stated, “It’s probably the most difficult test we could face.” They are world champions, with outstanding talent and exceptional individual players. They are very difficult to play against and score against so it’s an incredible challenge and brilliant game to prepare.”

England has five days to recuperate before heading back to Al Bayt, the stadium inspired by a Bedouin tent.

After three games without goals, Harry Kane finally got off the mark in Qatar. This was the record haul for England by the captain from Wayne Rooney.

The new generation was dazzling – Jude Bellingham, 19, was the creative spark in counterattacks. This led to Henderson and Kane scoring in the first period.

After the break, the third goal was created by a clever move by the children. Phil Foden was the one who crossed and Buyako Saka provided the delicate touch.

England can be encouraged by a third consecutive clean sheet. Even when it is difficult to defend, England will prevail.

However, any mistakes could prove costly and will be punished by Kylian Mabappe and his team on Saturday.

It’s possible to stop that from happening.