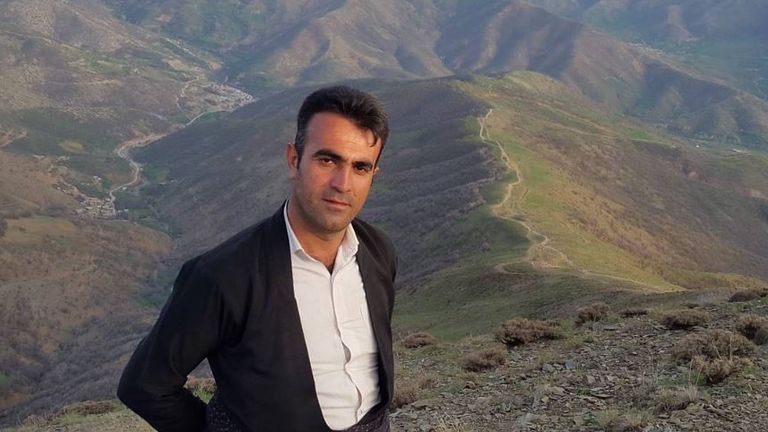 After having a chat with his friends, he gets in his car and parks it down on a quiet street.

He is accompanied by two trucks laden with armed men. Two shots are fired within seconds.

He clings to his life and presses the accelerator hard to get his car to speed up the 240m it must travel to get to his house.

He is pulled out of the car by his family and neighbors.

They can’t save him. He dies of his injuries.

His attackers don’t know that their actions were caught on camera.

The killing is captured by discreet CCTV cameras and appears cold-blooded enough that it could be a gangland murder or assassination.

Now we know that the man is a father of two and a local businessman. He was 40 years of age. Married. He was described as a loving person, a father figure, and a poet and song writer. His loved ones will miss him deeply.

We have broken down key evidence from CCTV footage to show how chilling this murder is.

This was the moment Motaleb was attacked.

It is a major commercial center and a great place for shopping.

The city’s northwest fringe is quiet…

… mainly home to a few stores, warehouses, and residences.

It is where Motaleb resides, and where he was found on the afternoon of October 27, 2007.

We were able to confirm his location by matching the CCTV footage with a Planet satellite image.

The camera shows us the date according the Iranian calendar, and the time: 4.15pm.

Motaleb is standing next to his car when he notices something that scares him.

A white Toyota Hilux and Land Cruiser with sand colours pull up. Experts say these vehicles are often used by Iran’s Revolutionary Guard – the IRGC.

Motaleb quickly tries to get in his car.

Motaleb is terrorized by the men. The white truck’s driver points his gun at Motaleb but doesn’t fire.

Two plain-clothed men jump out of his car and crowd it with their plain clothes.

Motaleb starts to drive off, but the attackers haven’t stopped. He is shot straight at by this man.

The second man also fires. The smoke is visible from the gun.

The men in the second truck appear surprised and stand up to take a better view of what’s happened.

Motaleb is able to drive the 240m back to his house, but his injuries are severe.

His family and neighbors pull him from the car. He succumbs to his injuries.

Motaleb’s cousin Raman says, “I have no joy anymore.” He speaks from his Swedish home. “When I discovered I was pregnant, I didn’t know what to do… I still feel tearful when you ask about him.”

Five years apart, Raman and Motaleb grew up in Iran.

“Motaleb was very down-to-earth. He was very social, thoughtful and kind. He says that people loved him.”

Sky News spoke to only those Motaleb’s relatives who are not Iranian. Anyone speaking out against the government can be punished.

Raman tells us that Motaleb was an integral part of the family, in good and bad times.

He said, “He was very kind and cared about everybody.”

Motaleb’s spouse and his two children, Motaleb’s 13- and 16-year-old daughters, are in deep grief. Raman says that the family is shocked by what has happened.

Motaleb’s passing was not the end of tragedy for the family.

Iranian forces shot and wounded family members who tried to travel from an Iraqi village to attend the funeral. Although they claimed they had the right permission to cross the border, two men were admitted to hospital and one died.


What other information does the CCTV footage reveal?

These two Toyota models are associated with the regime, and they appear in other Baneh videos.

Sky News has verified clips that show identical or very similar trucks used to patrol the streets of the city on different days. The footage shows the vehicles patrolling Baneh streets with security guards firing on civilians.

We can also get important clues from the men at the back of the second truck.

Their uniforms, helmets, and weapons suggest that they are a mixture of IRGC officers and Basijis – paramilitary officials allied with Iran’s regime.

This context suggests that the men seen in the white truck may be members of the regime in plain clothes. Motaleb was attacked and intimidated by at least 12 men.

These attackers’ chaotic actions indicate that they did not intend to kill the father of the village.

The CCTV footage shows that the men don’t immediately kill Motaleb but instead spend time intimidating him and smashing his window. The second truck’s men also appear to be surprised by the gunfire.

CCTV footage also shows that one man does not appear to interact with Motaleb. Instead, he runs towards others in the area who fled when the trucks arrived.

The group eventually includes other members who attack another vehicle nearby, appearing to smash its windows.

Sky News’ Dr Saeid Golkar reviewed footage from the attack. He is the author of Captive Society. The Basij Militia. He believes that the men were likely to be regime forces who are trying to suppress local protests by instilling fear in the community.

He says, “We can assume they were deployed in this area primarily because there was some sort of protest in the days prior.”

“They sent these forces to terrorize the neighborhood and send the message that ‘we’re going to punish’.”

He explained that the Islamic Republic attempts maintain order by creating a “chilling atmosphere” to terrorize people with “unpredictable violence and “brutality.” These men have an absolute carte blanche to carry out these orders.

Dr Golkar states: “This is a very good illustration of how they enforce and implement that strategy… [The IRGC or Basij] know they won’t be pursued and that they don’t have to face the law and be held accountable for their actions.”

Security forces might have been told to intimidate locals to quell further protests on the day Motaleb was being attacked. The day before, there had been a significant increase in demonstrations.

Baneh and other Iranian cities were witnessing the end of the mourning period for Mahsa Amini (the young Kurdish-Iranian women who died during her arrest) which sparked protests that continue to sweep Iran.

The protests now enter their tenth week. They appear to have become more bloody in the last ten days.


Sky News reported that at least 37 protesters and others, including three children were, have been murdered by security forces since Tuesday, 15 November.

The Armed Conflict Location & Event Data Project has been monitoring protests throughout the country.

The most recent data show that the Kurdish region was one of the most active in protests between 16 September to 11 November following the death of Amini.

It also shows Motaleb’s Baneh city is not one the protest sites, but our investigation shows it was still brutally policed.

Motaleb’s demise was confirmed by the Iranian authorities.

According to a state-affiliated news source, Motaleb, the Kurdistan governor’s security and political deputy, claimed that he was a rioter who had been killed by unidentified armed men.

This comment was made before the CCTV footage was released. It is clear that Motaleb wasn’t participating in protests or acting as a violent rioter and he was not a threat.

Also, the video shows that the men may be linked to Iranian authorities.

Sky News reached out to the Iranian Embassy in the UK for comment, but they declined.

Motaleb’s family claims that he wasn’t politically active and didn’t take part in protests. This could have made him a target. Sky News was also unable to locate any direct connections between Motaleb’s activities and those of organised groups.

Dr. Golkar has the clear answer.

He stated that Motaleb was a man who was in the wrong place at the wrong time. Therefore, he became the victim of the brutality of the IRGC/Basij who came to this area to terrorize people.”