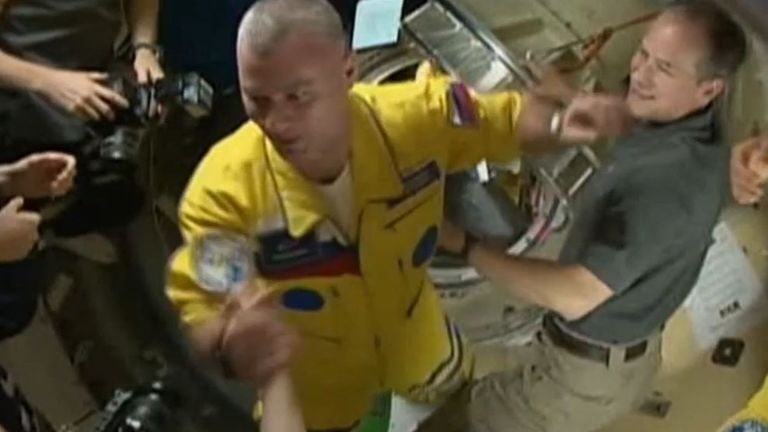 Russian cosmonauts have been pictured holding up the flag of the self-proclaimed Luhansk People’s Republic as they celebrated the region’s capture by Vladimir Putin’s forces in eastern Ukraine.

The image was posted by the Russian space agency Roscosmos on the Telegram messaging app.

It described the capture of the Luhansk region as “a liberation day to celebrate both on Earth and in space”.

Roscosmos wrote: “This is a long-awaited day that the residents of the occupied areas of the Luhansk region had been waiting eight years for.”

Back in March, Mr Artemyev, Mr Matveyev and Mr Korsakov were the first Russian crew members to join the ISS since Russia’s invasion of Ukraine began on 24 February.

They emerged from their Soyuz capsule in yellow uniforms, which was seen by some as a message of solidarity with Ukraine.

But when asked about the significance of the spacesuit, Mr Artemyev explained that each crew gets to choose its own flight suit to differentiate itself from others.

“It became our turn to pick a colour. But in fact, we had accumulated a lot of yellow material, so we needed to use it. So that’s why we have had to wear yellow,” he said.

Russia announced on Sunday its troops had seized the city of Lysychansk, completing its conquest of Luhansk, one of two regions that make up the Donbas – which the Kremlin has demanded Ukraine gives up control of to Moscow-backed separatists.

For the last two months, Moscow has brought the full might of its ground forces to bear on a small pocket of the frontline.

During a televised meeting with his defence minister Sergei Shoigu, Mr Putin congratulated Russian forces on their “victories in the Luhansk direction”.

Those who participated in the fighting should “absolutely rest and recover their military preparedness”, while other units continue combat in other areas, he added.

Luhansk’s capture marks Russia’s biggest victory in the war since it seized the southern port of Mariupol in late May.

And it is the closest Moscow has come to achieving one of its stated objectives since its forces were defeated trying to capture the capital Kyiv in March – namely that it is “liberating” the Donbas.

Read more:
Russians ‘worn down’ in Lysychansk and have had ‘real problems’
Civilians learning the hard way that mines will take years to clear 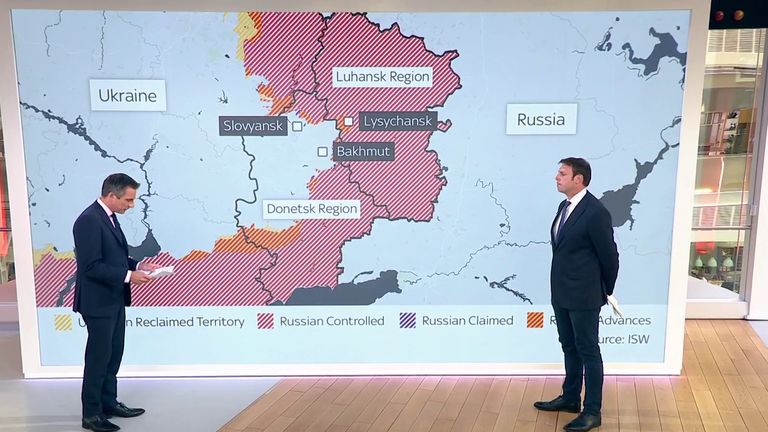 Roscosmos also said: “We are convinced that July 3, 2022, will forever remain in the history of the (Luhansk People’s) Republic.”

Ukraine has vowed to regain the lost territory, insisting its troops had withdrawn from their last remaining bastion in the region to save the lives of its soldiers.

Kyiv said its forces would regroup to launch a counter-offensive with the help of long-range weapons from western countries.

After being repelled in its initial attempt to capture Kyiv, Russia has focused on driving Ukrainian forces out of the eastern Luhansk and Donetsk regions.

Separatists have been fighting Ukrainian troops in those two regions since Russia’s first military intervention in Ukraine in 2014.

Moscow will hope that the Ukrainian retreat gives Russian forces momentum to push further west into the neighbouring Donetsk region, where Ukraine still holds the cities of Sloviansk, Kramatorsk and Bakhmut.