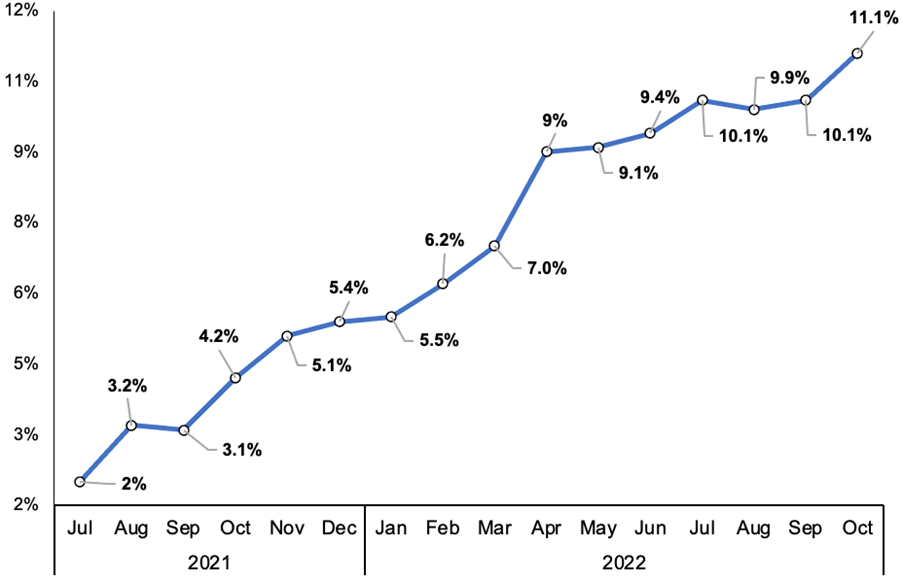 The United Kingdom’s inflation rate has risen beyond the City and Bank of England’s predictions.

However, experts believe it may have peaked – reports the Office for National Statistics (ONS).

Prices rose 11.1 per cent over the last year, pushing the rate a whole percentage point higher from September.

The reading topped the Bank of England (BoE) hopes of a 10.7 increase.

The rise has been fuelled again by runaway energy bills following Russia’s invasion of Ukraine.

Energy bills rose to £2,500 in October and food prices climbed 14.8 per cent, the fastest acceleration since September 1977.

Last January, prices rose 5.5 per cent and inflation has not hit the Bank’s two per cent target since July 2021.

The turbulent conditions have seen the BoE and the Monetary Policy Committee (MPC) raise interest rates eight times in a row.

The nation’s purse keepers believe Britain is on course for its longest recession on record.

“The real bad news in this report, however, is that the pace of core price rises hasn’t eased yet, despite the recent softening in consumer demand,”

Chancellor Jeremy Hunt is expected to raise taxes and cut government spending by around £55bn to balance the UK’s finances.

He said: “It is our duty to help the Bank of England in their mission to return inflation to target by acting responsibly with the nation’s finances.

“That requires some tough but necessary decisions on tax and spending to help balance the books.”

Germany and Italy have higher inflation rates than the UK.