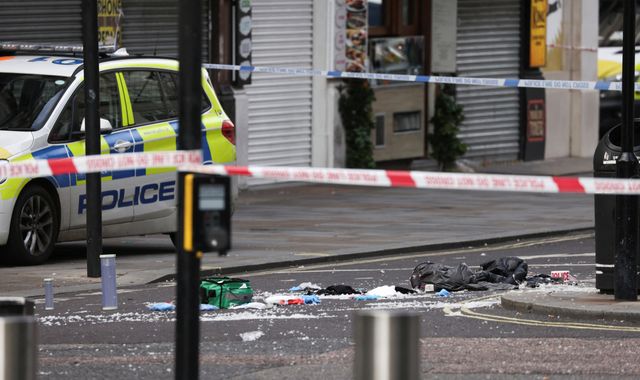 A young woman police officer and her colleague have been stabbed in central London.

It’s reported a “frenzied individual” launched the assault at 06.00 in Leicester Square.

The female officer was stabbed through a vein in her arm – causing a “massive blood loss”.

A police chief warned the injury could be “life-changing”.

The male officer was stabbed three times in the neck and once in the chest.

He is expected to make a full recovery.

The attacker was questioned by the police after the female officer suspected he was carrying weapon.

He stabbed her before running off.

The man was overpowered and arrested and is in custody.

“Her colleague chases down the offender, catches him – a tussle ensues – that officer is stabbed three times in the neck and once in the chest.

“There’s a violent struggle with a fairly frenzied individual – tasers deployed, PAVA spray is deployed and then an officer uses his baton – eventually the offender is subdued and arrested.

“The two officers were rushed to hospital.”

“It’s a reminder to me that with all the calls for reform in the Metropolitan Police – which are absolutely necessary – we should never forget that we’ve got thousands of dedicated men and women going out every day who are prepared to be brave for Londoners.”

It is not thought the attack is linked to an act of terrorism.