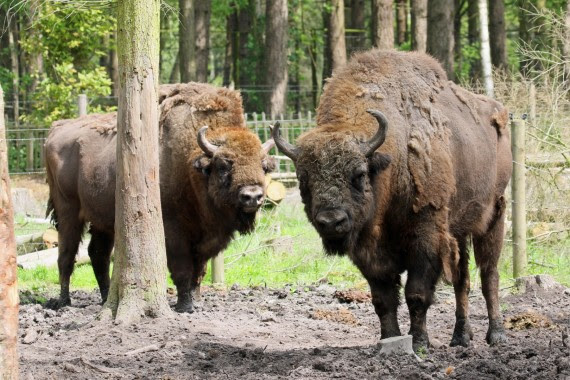 Wild bison have been released into the Kent countryside in a £1.2 million project to “re-wild” the countryside.

Bison have been extinct in Britain for more than 6,500 years.

Experts believe bringing it back will help revitalise ancient woodlands and create an “explosion of biodiversity”.

A male and three females have been set free in a wildlife area near Canterbury.

They are European Bison – a close relative of the species that once roamed the UK – and can weigh up to one tonne.

They create muddy ponds, push down trees and disturb the soil – all helping plants and other animals to survive.

Paul Whitfield, director-general of the Wildwood Trust, which is leading the project with the Kent Wildlife Trust, said:

“They will create an explosion of biodiversity and build habitat resilience, locking in carbon to help reduce temperature rise.

“This will act as a huge catalyst for change.”

“We need to revolutionise the way we restore natural landscapes – relying less on human intervention and more on natural engineers such as bison, boar and beaver.”