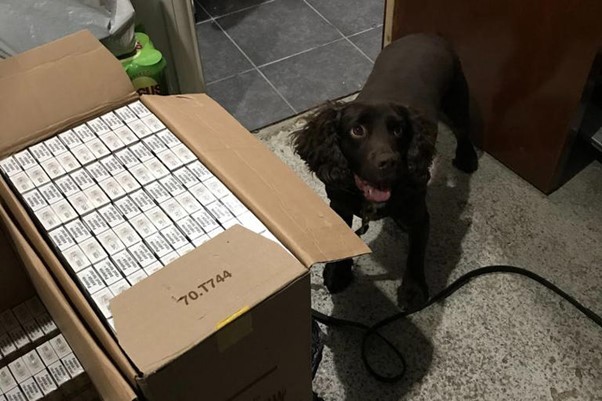 A newsagent has been fined more than £6,000 after a sniffer dog helped discover 14,000 illegal cigarettes hidden in his shop.

Trading Standards officers – and a sniffer dog – called at his North London shop.

Within minutes the highly training dog had smelt 700 packets of “dodgy” tobacco hidden in a locked cabinet.

They were being sold for £8 a pack – a fiver less than the retail value.

It was Lupes’ third offence.

He has now closed his business – with reported losses of £400,000 – and returned to Romania

“Selling illegal tobacco puts people’s lives at risk and can do real damage.

“I hope this case sets an important example that we will go after heedless law-breakers to protect the public’s health and get illegal tobacco products off the streets.”

The trading standards’ investigation, alongside officers from HMRC, is part of Operation CeCe – a national initiative to tackle illegal tobacco trading at all levels.

In 2021, the Brent and Harrow branch, using their sniffer dogs, uncovered almost 90,000 illegal cigarettes, as well as 4kg of rolling tobacco and 45kg of shisha and smokeless tobacco.

“The use of sniffer dogs during visits to businesses has been worthwhile as the dogs have been able to locate illegal tobacco products that are hidden within the business such as compartments located under the floor or concealed shelving underneath the counter.”