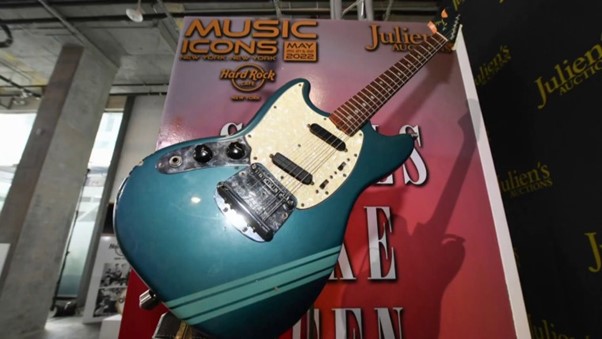 The Fender Mustang guitar played by Kurt Cobain on Nirvana’s “Smells Like Teen Spirit” has been sold for £4 million.

Bidders from around the world battled it out for the 1969 instrument.

In one of his last interviews he told  Guitar World:

“But out of all the guitars in the whole world, the Fender Mustang is my favourite.”

The Jim Isray Collection bought the guitar through Julien’s Auctions.

The Cobain family is donating some of the proceeds to Kicking The Stigma — the Irsay’s initiative to raise awareness about mental health disorders.

“This once-in-a-lifetime auction has been one of the greatest privileges in my professional career.

“I’m pleased that the proceeds will also bring much needed attention to mental health awareness.”