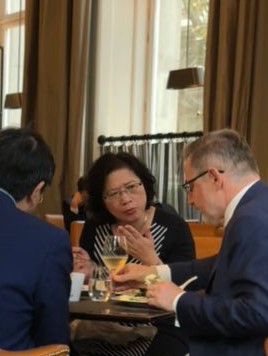 MI5 took the unusual step of naming the undercover agent- Christine Lee – and warned all MPs to be alert.

Sir Lindsay Hoyle, the Speaker of the House of Commons, sent out the warning.

He said Ms Lee “has been engaged in political interference activities on behalf of the Chinese Communist Party (CCP”.

He added the lawyer had been targeting MPs and other political groups throughout Britain.

Mr Gardiner had employed Ms Lee’s son as a diary manager in his parliamentary his office.

Slightly taken aback by seeing the staunch Labour MP is such a fine setting as the Corinthia Hotel in Westminster, he took a photograph.

Mr Braund was lunching with a lobbyist contact in the Northall restaurant.

It is next to the Department of Trade and Industry.

At the time Mr Gardiner, 64, was Labour’s shadow minister for the DoTI.

Taking advantage of a set lunch offered with a complimentary glass of Champagne, Mr Gardiner also appeared to be drinking white wine as he and Ms Lee hunched over the table, deep in conversation.

Mr Braund said: “I recognised Mr Gardiner, who has quite a high profile, but I’d no idea who the woman was.

“During the meal the conversation between Mr Gardiner and the lady was very animated.

“There was a lot of laughing and joking.

“He clearly knew her well.

“I can’t remember why but I felt compelled to take a picture of the luncheon.

“I was trying to take a photo primarily of him but ended up getting a better photo of Miss Lee.

“Looking back, and knowing what we now know, I can’t help wondering if MI5 were also watching the whole scene?

“We left the restaurant before they did and our bill was around £75 for two, so I guess theirs would have been around £100.

“I wonder who picked up the bill?”

The message from MI5 to MPs was stark.

“The United Front Work Department (UFWD) seeks to cultivate relationships with influential figures in order to ensure the UK political landscape is favourable to the Chinese Communist Party agenda and to challenge those that raise concerns about CCP activity, such as human rights.

China has dismissed the claims as “smearing and intimidation”.