“Friends shun me”, claims Eric Clapton over his controversial stance on Covid-19 vaccines 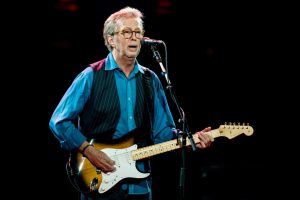 Eric Clapton has lost friends because of his stance as an anti-vaxxer.

The guitarist – who is double-jabbed – is against lockdown.

He has also vowed not to perform at gigs where proof of immunisation is needed.

Clapton said: “My family and friends think I am a crackpot anyway.

“Over the last year, there’s been a lot of disappearing – a lot of dust around, with people moving away quite quickly.

“It has, for me, refined the kind of friendship I have.

“And it’s dwindled down to the people that I obviously really need and love.

“Inside my family, that became quite pivotal.

“I’ve got teenage girls, and an older girl who’s in her thirties – and they’ve all had to kind of give me leeway because I haven’t been able to convince any of them.”

“I would try to reach out to fellow musicians and sometimes I just don’t hear from them.

“I don’t get that many texts and emails anymore.”