Darling Buds of May Rolls Royce up for auction 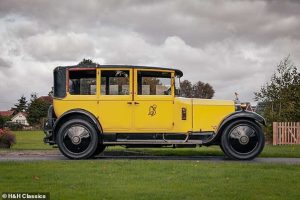 The yellow Rolls Royce from the original Darling Buds of May television series is up for sale.

The Park Ward Landaulette was driven by Pop Larkin – played by Sir Davd Jason – in the comedy-drama that ran from 1991 to 1993.

The 20hp was last under the hammer only two years ago.

The car is for sale at the Imperial War Museum, Kennington, south London, on November 17th.