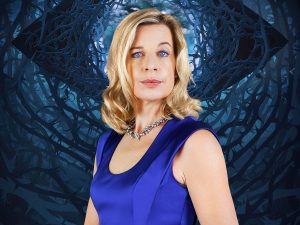 Controversial commentator Katie Hopkins has returned to Britain after being deported from Australia.

Ms Hopkins, 46, had gone to Australia to appear in its Celebrity Big Brother.

However, during her hotel quarantine she took to social media to mock the country and its Covid-19 rules.

She called the lockdowns the “greatest hoax in human history”.

On arriving at Heathrow, she told photographers “it’s nice not to wear a mask again”.

She then jumped into a waiting black Mercedes and drove off.

Her troubles in Australia started after she posted a video in which she told how she would “lie in wait” for hotel staff to deliver food to her hotel room.

She would open the door “naked with no face mask”.

Sydney and Melbourne are currently both in lockdown.

Following a public outcry about her behaviour the Australian cancelled her visa.

She was promptly sacked from the reality show.

Home Affairs Minister Karen Andrews said Ms Hopkins’ comments were “appalling” and a “slap in the face” for Australians in lockdown.

“We will be getting her out of the country as soon as we can possible arrange that.

Last year Ms Hopkins was banned from Twitter after a string of offensive comments.

She has called migrants “cockroaches” and described Islam as “repugnant”.