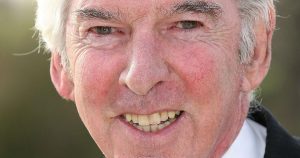 Comedian Tom O’Connor has died aged 81. He had Parkinson’s for the last ten years.

He hosted shows including Name That Tune, Crosswits and The Tom O’Connor Show.

His clean-cut style of humour made him a family favourite.

“He was a unique comedian who was light years ahead of political correctness.

“Tom was famously known for a brand of humour that was 100% clean and always totally family friendly.”

O’Connor was born in Liverpool and became a maths teacher and assistant headteacher.

However, he loved show business.

He started out as a singer before adding comedy to his routine.

He taught by day and worked the clubs at night.

Recounting his years, O’Connor had said:

“When I grew up as a kid in wartime Merseyside, I never dreamed I’d have a career that started as a schoolteacher, went to folk singer, then country and western singer, stand-up talker and TV presenter. I’ve been lucky.”