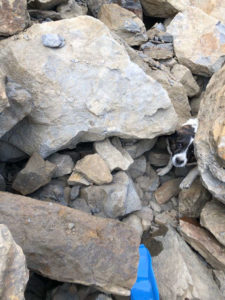 A Jack Russell was found trapped under rocks three days after going missing.

He was discovered following the sheer doggedness of a RNLI volunteer rescuer and his own pet dog.

Ed Thomas had been involved in rescuing a man near Skinningrove in North Yorkshire.

He was pulled to safety by the police, a mountain rescue team and members of the public

However, the rescuers couldn’t reach the man’s terrier and had to leave.

Mr Thomas and his own dog Olly returned to the scene three days later.

He said: “When the search finished on Friday night, of course we were delighted to have found the missing man.

“But the fact his dog was missing left a real bittersweet taste.

“So, when I went for my walk on Monday morning, I deliberately went in the direction of the rescue with the faint hope that I might find the Jack Russell.

“I managed to locate the dog trapped under rocks when Olly reacted to a nearby bark.

“I went over towards to what looked like a recent rockfall.

“Peeping out a small gap in the rocks I saw a little face staring back at me.

“It was the Jack Russell!

“He was in a bit of distress.” 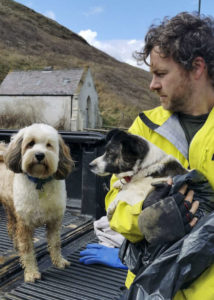 Mr Thomas called two other volunteers to help move the rocks to free the dog.

He said: “As soon as we got the rock off his leg he settled down and we were able to start walking back towards Saltburn with him.”

The dog is now back with his owner.