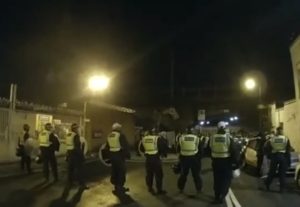 Police have issued more than £15,000 in fines after 300 people were caught at a rave in East London in a flagrant breach of Covid regulations.

The police raided the party after a tip-off that a music event was taking place in in a railway arch in Nursery Road, Hackney.

Extra officers were brought in – including public order officers, a dog unit, and the police helicopter.

Despite attempts to talk to the organiser the party continued.

The doors were padlocked from the inside to stop police getting in.

When officers forced entry, they found an estimated 300 people packed inside the small space.

Dozens scaled fences at the rear of the arch and others forced open a gate to get escape.

Seventy-eight people were stopped and issued with £200 fixed penalty fines.

“This was a serious and blatant breach of the public health regulations and the law in relation to unlicensed music events.

“Officers were forced, yet again, to put their own health at risk to deal with a large group of incredibly selfish people who were tightly packed together in a confined space – providing an ideal opportunity for this deadly virus to spread.

“Our frontline officers continue to police this public health crisis with compassion & professionalism.

“It is completely unacceptable they have to face such needless risks to their own health and to their families too.

“Whilst we will always seek to engage and explain, the message to those who have a total disregard for the safety of others and breach the law so blatantly is clear, our officers will act swiftly and decisively.

Not just organisers, but all those present at such illegal parties can expect to be issued a fine.”

“This event was organised in advance and each one of the 300 people who chose to turn up did so knowing they were putting themselves, their loved ones and the wider community at risk.

“I hope our response and the issuing of more than £15,000 in fines demonstrates that we will not tolerate blatant breaches of the rules that are in place to keep everyone safe.

“I’m proud of the officers who dealt with this crowd and all those who continue to work on the frontline at this unprecedented time.”