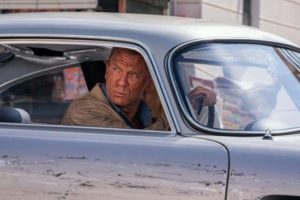 Bond film “No Time To Die” – Daniel Craig’s last outing as 007 – has been delayed once again.

The film – originally scheduled for release in April 2020 and then last November – was moved to April 2021.

Now that has been pushed on to October 2021.

It was the first major Hollywood production to postpone release because of the Covid-19 pandemic.

It’s hoped the movie will be released around the world on the same day in October.