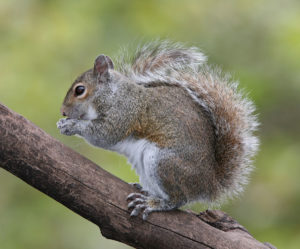 Grey squirrels will cause more than £1 billion of damage to Britain’s woodlands, says the Royal Forestry Society (RFS).

It has called for the “tree rodents” to be culled.

The invasive grey has already eradicated most of the country’s native red squirrel.

The greys not only monopolise the available food but spread the lethal “squirrel pox”.

They also strip away the bark of young trees, destroying forests.

Scientists believe the grey squirrel will cause £1.1 billion of damage in the next 40 years.

The RFS would like greys to be “lethally” controlled where the population is out of hand.

It suggests shooting or poisoning.

However, as a more humane option, it is researching a contraception method to stop them breeding.

Woodland owners say the grey squirrel is the number-one threat to their broadleaf woods.

“Woodland creation is at the top of the forestry policy agenda, but many of those new trees will not survive to deliver the carbon capture or biodiversity objectives if grey squirrels cannot be controlled.

“If woodland owners are deterred from planting species such as oak within woodland mixes, we may be looking at a loss of home-grown high-quality hardwood timber, further increasing a dependency on imports.”

“We have been creating the National Forest in the Midlands for the past three decades, so many of our trees are vulnerable stage with regard to squirrel damage.

“We’re working with landowners to create a landscape-scale programme of control, to enable us to continue to plant productive woodlands which are accessible by people and provide a diverse habitat for wildlife.

The grey squirrel came to Britain aboard boats from America at the end of the 1800s.