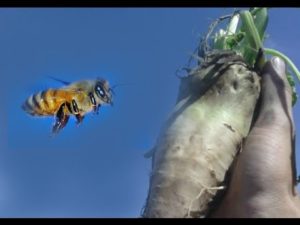 A bee pesticide so noxious the EU bans it, could be used in England on sugar beet.

The pesticide has neonicotinoids which pose a risk to bees and other pollinating insects.

It is hoped the repellent will protect the crop from a virus.

However, environmentalists claim the Government has caved in to pressure from farmers.

They say during a world eco crisis everything should be done to save bees, not allow them to be killed.

A third of Britain’s bee populations is reckoned to have vanished in the last ten years.

“Bad news for bees: The Government has bowed to pressure from the National Farmers Union (NFU) to agree the use of a highly damaging pesticide.

“The government knows the clear harm that neonicotinoid pesticides cause to bees and other pollinators and just three years ago supported restrictions on them across the European Union.

“Insects perform vital roles such as pollination of crops and wildflowers, and nutrient recycling, but so many have suffered drastic declines.

“We need urgent action to restore the abundance of our insect populations, not broken promises that make the ecological crisis even worse.”

NFU sugar board chairman Michael Sly said the pesticide – called Cruiser SB – would be used in a limited and controlled way.

He added: “Virus yellows disease is having an unprecedented impact on Britain’s sugar beet crop, with some growers experiencing yield losses of up to 80 per cent, and this authorisation is desperately needed to fight this disease.

“It will be crucial in ensuring that Britain’s sugar beet growers continue to have viable farm businesses,”

“Pesticides can only be used where we judge there to be no harm to human health and animal health, and no unacceptable risks to the environment.

“The temporary use of this product is strictly limited to a non-flowering crop and will be tightly controlled to minimise any potential risk to pollinators.”