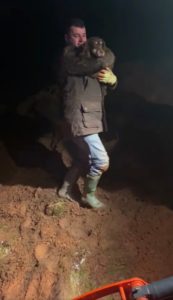 Dog owner Duncan Flowers used a JCB digger to rescue his pet after she disappeared down a rabbit hole.

He searched for hours, helped by other dog walkers.

Finally, he guessed she was down a rabbit hole.

The self-employed roofer gathered 24 mates to return to the site later.

They brought with them a small digger and a plumber’s drainage camera.

The team dug throughout the day and into the evening.

They used torches and mobile phones to light the scene. 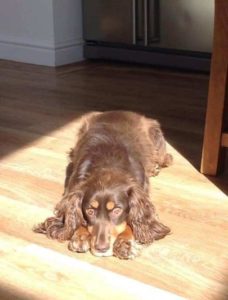 Duncan, from of Stourport-on-Severn, Worcestershire, said:

“Twenty-five of us dug for over three hours with the help of a JCB and then finally Dizzy turned up.

“I’m delighted to have her back. I thought she was lost forever.

“For her to suddenly pop out was a miracle — the best thing in the world.

“Everyone burst out crying, 25 burly blokes crying their eyes out.

“The whole family has had such a boost from it, it’s unbelievable.”