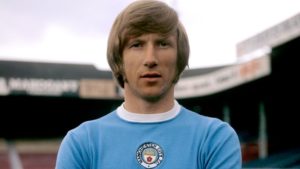 Footballer Colin Bell – one of England’s most gifted players – has died.

He is regarded as one of the greatest players to have worn the City shirt.

A stand at the club’s Maine Road ground is named after him.

“Colin Bell will always be remembered as one of Manchester City’s greatest players.

“The very sad news today of his passing will affect everybody connected to our club.”

As a mark of respect, City players will wear a 60s style shirt with Bell’s number 8 on the back when they play local rivals Manchester United tonight (Wednesday).

At City he formed a key playing partnership with Francis Lee and Mike Summerbee.

Both Manchester City and Manchester United were in their pomp at the time – a showcase around the world for English football,

“It is with the deepest sadness and heaviest of hearts we announce the passing of Manchester City legend Colin Bell.

“Colin passed away peacefully this afternoon after a short, non-Covid related illness, aged 74.

“He leaves behind wife Marie, children Jon and Dawn and grandchildren, Luke, Mark, Isla and Jack.”

The following year he held the FA Cup after City beat Leicester City 1-0 at Wembley.

In 1970 he won the League Cup and European Cup Winners’ Cup.

Bell once said: “I was put on this earth to be a footballer.

“I just thought, at the back of my mind, even though I was going through school, I would become a professional footballer.”

He was awarded an MBE in 2004 for services to the community.