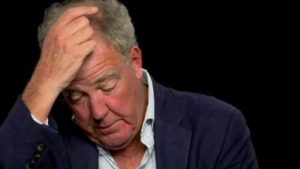 Presenter Jeremy Clarkson caught the Covid-19 virus over Christmas – and he said it was “scary”.

The Grand Tour presenter admitted he doesn’t know if he’s fully recovered from the illness.

He said: “Four days before Christmas, I woke in the night to find my sheets were soggy.

“And that I had a constant dry cough.

“The test result was positive, and the doctor was very clear – I’d feel under the weather for between five and 14 days and then I’d either get better or I’d have to go to hospital.”

The Who Wants To Be A Millionaire? Host wrote in his Sunday Times column:

“Because I am 60 and fat, and because I’ve smoked half a million cigarettes and had double pneumonia, I’d probably die, on my own, in a lonely plastic tent.

“With every illness I’ve had, there has always been a sense that medicine and time would eventually ride to the rescue.

“But with Covid-19 you have to lie there, on your own, knowing that medicine is not on its way and that time is your worst enemy.”

Clarkson admitted he didn’t feel too bad at the start, but his breathing started to be “laboured”.

He said: “We keep being told that we know a great deal about Covid, but what I’ve learnt over the past 10 days is we don’t.

“We don’t know how long we are infectious for.

“We don’t know how to tackle it.

“We don’t know what it does to us.

“We don’t know how long the antibodies last.

“We don’t know how easy it is to catch it twice.

“And we certainly don’t know if any of the vaccines will work long-term.