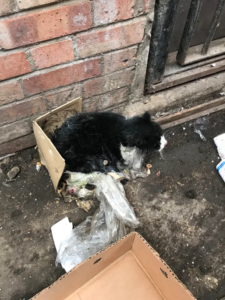 The RSPCA has called for rodent glue traps to be banned when a cat had to be put down after being caught up in four of them.

The cat – called Miles – was found in an alleyway in North London.

His back legs were stuck together, and his fur submerged in the stick morass.

The non-setting glue had been smeared on cardboard.

The traps – banned in some countries – are to catch rats and mice.

Miles was taken to an RSPCA hospital but could not be saved.

“This poor cat was in an extreme amount of pain from his horrific injuries and he was very scared and frightened.

“This is the worst glue trap incident I have ever seen and dealt with.

“I find the use of glue traps horrendous and completely unnecessary.

“People sometimes use them to deal with problems caused by animals like rats and mice but they are cruel and cause awful suffering.

“Other animals and non-target species also become victims – in this case poor Miles.”

Glue traps are legal in the UK.

But if a caught animal suffers unnecessarily an offence might have been committed.

The RSPCA wants to see the traps taken off shop shelves.

“We’re opposed to the manufacture, sale and use of all glue traps because they cause unacceptable suffering and are totally indiscriminate in what they catch, ensnaring wild animals like birds and even pets.”

Anyone with information about who set the traps Miles was caught in is asked to call the RSPCA appeals line on 0300 123 8018.

Glue traps are illegal to use in America and have been branded “one of the cruellest methods of rodent control” by the animal welfare group PETA.