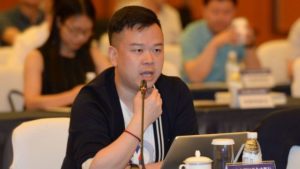 A Chinese gaming developer has been poisoned on Christmas Day.

Lin Qi, 39, was the boss at Yoozoo – best known for the Game of Thrones: Winter Is Coming game.

He was also a Netflix producer on The Three-Body Problem.

Shanghai police believe Mr Lin was murdered and want to talk to one of his colleagues.

They have named him as Mr Xu.

Mr Lin is worth £780m, according to the Hurun China Rich List.

Many employees and ex-employees gathered outside the Yoozoo’s office on Friday to mourn his death.

A company statement on its official Weibo microblog said:

The post attracted thousands of comments while the topic has been viewed more than 290 million times on Weibo.