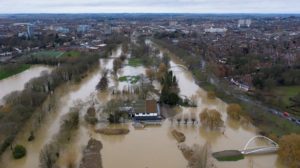 Weather officials have warned people the storm poses a “danger to life”.

The Met Office has issued amber warnings across the whole of the south coast – from Cornwall to Kent.

There are yellow weather warnings in place across England, Wales, Northern Ireland, and Scotland.

The Environment Agency has issued a further 88 flood warnings in England, six in Wales and 12 in Scotland.