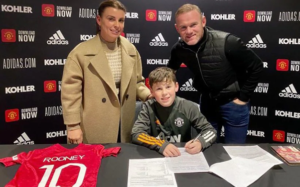 The 11-year-old has signed a Premier League academy registration to be part of United’s junior team.

His proud parents Wayne and Coleen looked on as the youngster made his mark.

“Keep up the hard work son.”

“I love you and I am so proud of you.

Kai is also said to be a talented tennis player after taking up the sport during his time in America with his parents.

Rooney senior hits 253 goals for United during his 13 years at Old Trafford.