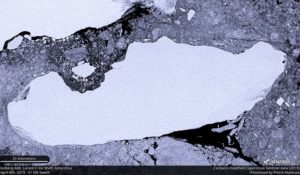 British scientists are to investigate the impact of the world’s biggest iceberg as it heads towards land.

The berg – measuring 2,000 square miles – is only 40 miles from South Georgia in the Antarctic.

It broke away from the Larsen C ice shelf three years ago.

Wildlife experts fear the berg could have a devastating effect in the region if it crashes.

South Georgia is home to tens of thousands of penguins and six million fur seals.

The waters have a richer variation of marine wildlife than anywhere else.

The salty seas will be flooded with melting fresh water.

The research ship RRS James Cook is expected to sail from the Falkland Islands in late January.

Two submersible robotic gliders will be used to collect data from the melting berg – known as A-68s.

At one point it was moving at 12 miles a day, depending on wind speed.

Geraint Tarling, an ecologist at the British Antarctic Survey, said:

“The iceberg will cause devastation to the sea floor by scouring the seabed communities of sponges, brittle stars, worms and sea-urchins, so decreasing biodiversity.

“These communities help store large amounts of carbon in their body tissue and surrounding sediment.

“Destruction by the iceberg will release this stored carbon back into the water and, potentially, the atmosphere, which would be a further negative impact.”

But this mission is needed urgently.

He said: “Everyone is pulling out all the stops to make this happen.”