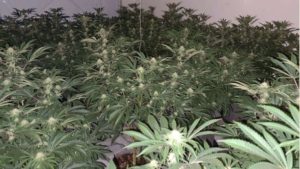 The man – who spoke little English – had been stopped in his grey Mercedes car by a patrol car.

The police could smell cannabis in the vehicle, but a search revealed nothing.

When asked further questions he struggled to answer he opened up Google Translate on his phone.

But instead of a perfect reply in English he allegedly showed the officers a cannabis farm video.

Officers from Northumbra Police later discovered a farm at a property in Easington Lane, Sunderland.

There were more than 600 cannabis plants covering three floors.

The farm was shut down and the drugs seized.

Two men, aged 38 and 22, were arrested on suspicion of production of a Class B drug.

They have been released on bail.

“This was a rather unusual incident which saw a suspect open up his phone to try to use Google Translate – but inadvertently showed us a video of a cannabis farm in the area.

“It’s safe to say the suspect was a little shocked and tried to quickly lock his phone in the hope that nobody had seen.

“Unfortunately for him, that resulted in him and his associate spending a night in a police cell – and we were able to carry out further enquiries which led us to an address on High Street in Easington Lane.”

He said:  “Often the electricity has been bypassed which poses a serious and real fire risk to not only the property involved, but families living in the vicinity.”