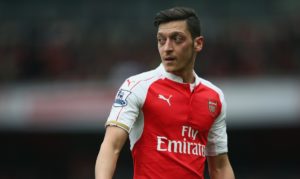 Arsenal midfield player Mesut Ozil has escaped a driving ban after claiming he mixed up kilometres and miles.

The police clocked the German World Cup winner at 97 mph on the M1.

He was driving his £160,000 Mercedes G-class from the Gunners’ training ground to his home.

Ozil told the court that he was “very much against travelling on public transport”.

He said he had a baby daughter and wife did not drive.

He wrote to magistrates in Bromley:

“When attempting to rationalise my actions, I believe it was the combination of the empty road, with no other vehicles to gauge my vehicles speed against, and the misapprehension that I was travelling kmph rather than mph.

“Due to the Covid-19 restrictions the motorway was effectively empty.

“The only explanation that I can give is that due to the absence of other vehicles on the road, my concentration must have momentarily lapsed.

“The vehicle I was driving has very low engine noise and it is automatic transmission.

“I am a German national and I am obviously used to driving vehicles that would display speed in kilometres as compared to miles per hour.

“I do not suggest that this in any way excuses my driving on the day at all — I fully accept that the speed my vehicle was travelling is wholly unacceptable.”