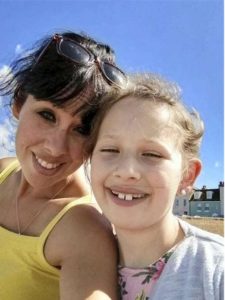 A mum and her eight-year-old daughter had a narrow escape after taking home a WWII hand grenade they found on the beach.

Jodie Crews and daughter Isabella picked up the 80-year-old ordnance at Sandown at Deal in Kent.

At first, they thought it was a fossil.

Jodie posted pictures online asking if anyone could identify the object. 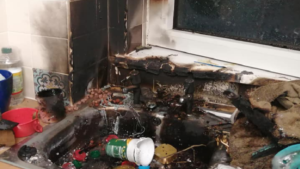 “I had lots of replies, but no one suggested it could be a grenade.

“She said I could find out by poking it with a hot pin.

“She said a puff of white smoke would come out.”

Suddenly, while researching the find in the living room it burst into flames.

“It just turned into a fireball.

“My daughter screamed and ran out the back door.

“I grabbed the grenade and ran with it at arm’s length into the kitchen where I hurled it into the sink.

“We just went into survival mode.

“I then rushed upstairs to soak a towel to throw over it to put it out.

“The adrenalin must have kicked in and taken over.”

A neighbour called the fire brigade who later said the object was a grenade.

It had probably been exposed by recent high tides and storms.

Jodie said: “We were unbelievably lucky.

“It could have been a hundred times worse.

“All my friends have made me promise not to pick anything up from the beach again.’