More than £44 million worth of MDMA – ecstasy – has been found in a digger shipped from Britain to Australia.

The 450 kilos of the Class A drug were hidden in a specially adapted boom attached to the machine.

The boom was lead-lined to prevent the 226 concealed packets showing up on an X-Ray.

But officers from the Australian Federal Police (AFP) saw through the ploy.

After being emptied of the drugs the digger was delivered to its intended recipient in Sydney.

Three men were later arrested in London and two in Western Sydney.

It was a joint operation between the AFP and Britain’s National Crime Agency (NCA).

Investigators knew a London-based crime gang had imported the MDMA into Britain before concealing them in the boom and exporting the machine to Australia.

The NCA had drawings of the adapted boom, import costs and a loading date for the ship to leave Southampton. 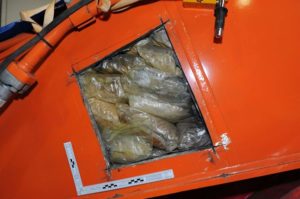 Two of the men believed to be involved in arranging the importation and exportation, Danny Brown, 53, and Stefan Baldauf, 60, were arrested in Putney by NCA officers on 15 June.

A third man, Peter Murray, 57, was detained outside his home address in Greenwich on 1 October.

All three were charged with conspiring to export Class A drugs.

Baldauf, a German national, was additionally charged with illegal entry in breach of a deportation order.

They are next due to appear at Kingston Crown Court on January 15th 2021.

On December 9th AFP officers arrested two men aged 33 and 42 who have also subsequently been charged. 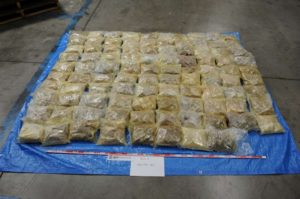 “This was a global conspiracy to import huge amounts of class A drugs into the UK, then out to Australia.

“Through close working with our Australian partners and analysis of encrypted messages recovered as part of Operation Venetic, we were able to uncover this highly organised conspiracy and prevent the criminals behind it from making millions in illicit profits.

“In the UK, this amount of MDMA could potentially make close to £18 million.

“In Australia, profits would have been even higher – $79 million (£44m) if sold on the streets.

“Disrupting the Organised Crime Gangs involved, particularly those at the top of the chain with international reach, is a top priority for the NCA.”

Mark Bishop, head of the Asia and Pacific region for the National Crime Agency, who is based in Canberra, said:

“Every day, we work closely with Five Eyes partners to share intelligence on the serious and organised crime threats impacting our countries.

“The AFP are a key partner in this effort and their ongoing support is vital in disrupting those international crime syndicates with links to Australia and the UK.

“Throughout Operation Venetic alone, we have jointly seized two tonnes of cocaine, MDMA, and methamphetamine headed to, or in, Australia this year.”

“Organised crime groups seek to move illicit goods in bulk whenever they can and however they can.

“In this case they thought that hiding the drugs in machinery would be innocuous enough to avoid detection by Australian authorities.

“The AFP, working with its national and international partners, will not stop in our commitment to protecting the Australian community from the harm caused by these drugs and our pursuit of those who seek to profit from peddling misery.”