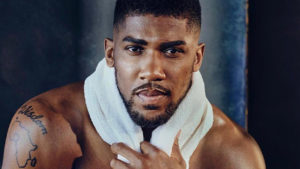 Boxer Anthony Joshua will not “take a knee” before his match against Kubrat Pulev.

However, Joshua – the current WBA, IBF and WBO titles’ holder – said he is committed to beating racism.

Ahead of the clash at Wembley Arena he said:

“What we’re trying to do is create a union to support British culture.

“That’s important – to showcase people from the Afro-Caribbean community as valuable members of British society.

“That’s what we’re working on at the minute.

“But for me, personally, I’m doing something different this time around.”

“I’ve employed someone with the team who is actually working on it. It’s a difficult task but no success comes without difficulty.

“Hopefully it comes to fruition and it’s really only to do positive things in the great British environment.

“There’s sometimes issues with stigma and stereotypes. So it’s to showcase NHS workers, architects, athletes and be positive for everyone in the community.

“I’m not a full-time activist so I’m more than likely to slip up here and there.

“So, what I would like to do is to team up with charities who deal with these things day in and day out and support their causes and champion certain things.”