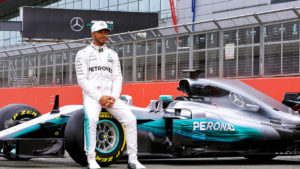 Lewis Hamilton will return to Formula 1 action this weekend in the Abu Dhabi Grand prix.

The race is the final outing before the end of the season.

The world champion was given the green flag after recovering from a positive coronavirus test.

He’d missed the Sakhir Grand Prix in Bahrain a week ago.

It was the first F1 race he’d not started since making his debut in 2007.

The FIA have confirmed that he tested negative for Covid, a must before entering Abu Dhabi.

“The Mercedes-AMG Petronas F1 Team is pleased to confirm that Lewis Hamilton will drive for the team in this weekend’s Abu Dhabi Grand Prix.

‘Lewis tested negative for Covid-19 on Wednesday prior to completion of his self-isolation period in Bahrain.

“This enabled him to travel to Abu Dhabi on Thursday afternoon, and he tested negative on arrival.

“Lewis has therefore completed the protocols required by the FIA for his entry to the paddock and will be able to take part in the race weekend.”