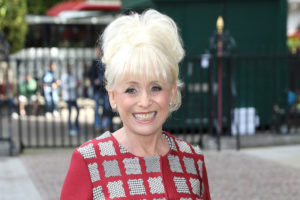 Dame Barbara Windsor – best known for her Carry On films – has died. She was aged 83.

Dame Barbara was one of Britain’s most beloved entertainers.

After coming to national attention for her saucy roles in Carry On she became a household name playing Peggy Mitchell – landlady of the Queen Vic in EastEnders.

Dame Barbara was diagnosed with Alzheimer’s disease in 2014.

Her husband Scott Mitchell said she died in a London care home.

He said his wife’s last few weeks were “typical of how she lived her life” and “full of humour, drama and a fighting spirit until the end”.

“Her passing was from Alzheimer’s/dementia and Barbara eventually died peacefully and I spent the last seven days by her side.

“Myself, her family and friends will remember Barbara with love, a smile and affection for the many years of her love, fun, friendship and brightness she brought to all our lives and the entertainment she gave to so many thousands of others during her career.

“Barbara’s final weeks were typical of how she lived her life.

“Full of humour, drama, and a fighting spirit until the end.

“It was not the ending that Barbara or anyone else living with this very cruel disease deserve.

“I will always be immensely proud of Barbara’s courage, dignity and generosity dealing with her own illness and still trying to help others by raising awareness for as long as she could.”

The star’s death prompted a torrent of tributes.

“So sad about Barbara Windsor, so much more than a great pub landlady & Carry On star.

“She campaigned for the lonely and the vulnerable – and cheered the world up with her own British brand of harmless sauciness & innocent scandal.

“Thoughts with Scott and all her family & friends.”

“A true national icon, and an inspirational campaigner on dementia.”

“Barbara Windsor was a national treasure and her death is a huge loss.

“Her acting brought a smile to people across Britain and she showed incredible courage after being diagnosed with Alzheimer’s.

“The country’s thoughts are with Scott and the family.”

“Dame Barbara Windsor was an amazingly true, much-loved national treasure, and in speaking out about her experiences shone like a beacon for others affected by dementia.

“Alzheimer’s Society is incredibly grateful to have had Barbara and her husband Scott’s support – what they achieved over the last couple of years for dementia has been truly awe-inspiring.”

The charity said Dame Barbara and her husband helped raise £4 million for the Dementia Research Institute.

Mr Mitchell, who has campaigned for greater dementia care from the Government, added:

“Dementia/Alzheimer’s remains the UK’s No 1 killer.

“Although in challenging times, I urge the Prime Minister, his government, and other parties to be true to their previous promises and invest more into dementia/Alzheimer’s research and care.

“Thank you to all the doctors, nurses and carers who are angels at the care home for your kindness and care to Barbara and me throughout her stay with you. You are my heroes.

“And my gratitude to our family, friends and everyone in the media and the general public for all the good wishes and warm support that has been shown to Barbara over the last few years during her illness.

“May you rest in peace now my precious Bar.

“I’ve lost my wife, my best friend and soul mate and my heart or life will never feel the same without you.

“I will be making no further statements and now need the time to grieve this painful, personal loss.”

Before becoming a television star in EastEnders, Dame Barbara was a staple part of the Carry On films; she appeared in nine from 1964 to 1974 in her usual role as a “good time girl” character.

The films were renowned for their saucy seaside postcard humour.

Dame Barbara had an infectious giggle that usually followed some heavily laden innuendo.

In Carry On Camping, during a rigorous exercise class, her bikini top flew off, hitting Kenneth Williams in the face.

Barbara Windsor was made a Dame in the 2016 New Year’s Honours List for her services to charity and entertaining.