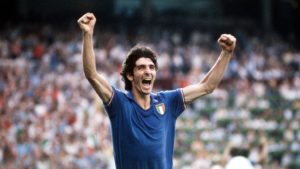 Paolo Rossi – one of football’s greatest strikers – has died. He was aged 64.

Rossi was the undoubted star of Italy’s World Cup winning team that lifted the trophy in 1982.

He won the Ballon d’Or the same year.

The forward sent favourites Brazil crashing out of the tournament with a hat-trick in Italy’s 3-2 win.

Many thought it one of the best games in World Cup history.

He scored both goals against Poland in a 2-0 semi-final win before dispatching Germany in the final with a 3-1 victory – scoring the opening goal.

His death was announced by Italian TV channel RAI Sport.

Rossi was a pundit for the broadcaster.

“Such terribly sad news: Paolo Rossi has left us.

“Unforgettable Pablito, who made all of us fall in love in that summer of 1982 and who was a precious and competent work colleague in RAI over recent years.”