Protected River Lugg bulldozed in “devastating” attack on the environment 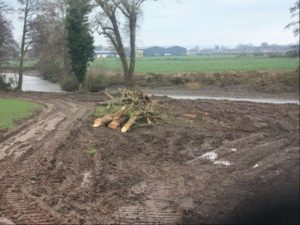 A protected riverbank and haven for wildlife has been bulldozed into bare earth.

Every tree and plant along a one mile stretch of the River Lugg has been stripped.

In investigation has been launched to find the culprits.

The River Lugg is a designated site of Special Scientific Interest and a Special Area of Conservation.

Its home to otters, kingfishers, salmon, crayfish, and dragonflies.

“The bankside trees are all grubbed out and burnt, the river gravels have been scraped away and the beautiful meanders of the river have been straightened and reprofiled.

“This is a crime against the environment.”

West Mercia Police, Natural England, The Environment Agency, and the Foresty Commission have started an inquiry.

“We are aware of reports of damage to the River Lugg, which due to its environmental importance is protected through Site of Special Scientific Interest status.

“We are treating this very seriously along with Natural England and the Forestry Commission who have taken immediate action in an attempt to prevent any further works at the site.

“We are unable to comment further at this stage.”

A spokeswoman for West Mercia Police confirmed someone had reported the Lugg damage to them on Tuesday.

She said: “The Environment Agency are leading on this and we will work with them as they look into the concerns raised.”

Ms Stace said the HWT was “fairly certain” who had carried out the bulldozing.

but would not name them to avoid compromising any future legal action.

She said: “We’re expecting the statutory agencies to pursue this with vigour and we’re hoping for a prosecution.”

“If you’ve gone there last week you would have seen a classic Wind in the Willows scene of a winding, tree-lined river bank, there were otters on that section, there’s a lot of kingfishers, trout and salmon spawning in the river. All that is completely gone.”