Excuse me…can ewe show me where the baa is please 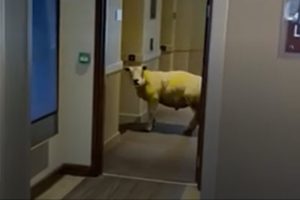 A sheep surprised hotel staff by walking into the building and making her way to the lift.

The sheep – nicknamed Sidney – was quickly shepherded back outside.

But not before a member of staff took a candid shot of her waiting by the lift.

Sidney was found in the Premier Inn in Holyhead.

“The team were rubbing their eyes when Sidney strolled in.