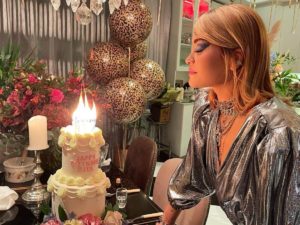 The singer held a “secret bash” at the Casa Cruz restaurant in Notting Hill, London.

More than 30 guests turned up – some sneaking into the premises through the back door.

During the party, the police were seen looking into the building through windows and trying a locked door.

They later called at the star’s home.

She voluntarily paid a £10,000 fine to the local council.

A source told the Mail Online:

“Rita knows her actions were wrong which is why she has voluntarily paid the £10,000 fine to the council.

“She hopes this will go some way to making up for her error of judgement.”

Meanwhile, Ms Ora posted on Instagram an apology to her 16 million followers.

“Hello all, I attended a small gathering with some friends to celebrate my 30th birthday.

“I’m deeply sorry for breaking the rules and in turn understand that this puts people at risk.

“This was a serious and inexcusable error of judgement.

“Given the restrictions, I realise how irresponsible these actions were and I take full responsibility.’

“I feel particularly embarrassed knowing first-hand how hard people have worked to combat this terrible illness and being fully aware of the sacrifices that people and businesses have made to help keep us all safe.

“Even though this won’t make it right, I want to sincerely apologise.”