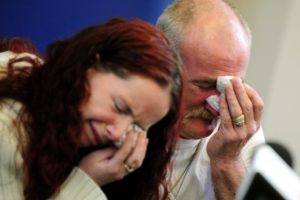 A mother who was jailed for killing her six children in a house fire has been released.

She was found guilty of manslaughter along with her husband Mick Philpott and another man.

Mick Philpott was jailed for life with a minimum term of 15 years.

The couple set fire to their home in Allenton, Derby, in May 2012.

Jade Philpott, 10, and her brothers John, nine, Jack, eight, Jesse, six, and Jayden, five, all died in the fire.

The Philpotts later appeared at a press conference.

Both sobbed as they showed “disbelief” at the blaze.

Mick Philpott even thanked fire crews for trying to save his family.

However, Nottingham Crown Court heard how the feckless Philpott was the “driving force” behind the fire.

He poured petrol on the living room floor while his wife rang the emergency services.

Mick Philpott wanted to frame a former partner for the arson attack.

“These were your children; your first responsibility, surely, was to them.”

The judge said she had to serve half her sentence.

She has been moved to a hostel where she will be under supervised licence.

Commenting on the release, local MP Pauline Latham said Mairead Philpott should not be allowed back to the area.

The Mid Derby Tory said in a statement:

“I am disgusted that this foul woman has her liberty while her daughter and five sons lie in their graves.

“Eight-and-a-half years in jail amounts to her serving less than 18 months for each of those poor children.

“How can that possibly be right?

“Those in charge of making these decisions need to think longer and harder about the victims and the value of their lives.

“In addition, this horrible crime is still very raw in Derby and I fear what would happen if she turned up in the city.

“Therefore, I am seeking assurances that she will not be returning to the area.”

The Centre for Crime Prevention described the release as “appalling” and called for killers to serve their full sentences for such crimes.

“The system of automatically releasing criminals halfway through their sentence means justice is not being done.

“This needs to change.

“Those convicted need to serve their full sentence.”