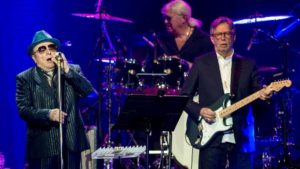 Rock legends Eric Clapton and Van Morrison have team up to record a song to “save live music”.

The track “Stand and Deliver” was written by Morrison.

The proceeds will go to his Lockdown Financial Hardship Fund.

It has been helping musicians facing difficulties because of the lockdown rules.

Live music and theatre have virtually ground to a halt throughout Britain.

“There are many of us who support Van and his endeavours to save live music; he is an inspiration.

“We must stand up and be counted because we need to find a way out of this mess.

“The alternative is not worth thinking about.

The song is available to download on December 4th.