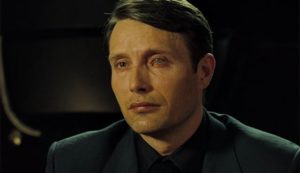 Depp “resigned” as the evil wizard Gellert Grindelwald after losing a High Court against The Sun.

The newspaper ran a story calling Depp, 57, a “wife beater”.

The final decision to replace Depp came after he was denied permission to appeal against the judge’s ruling.

The disgraced star had only shot one scene for Fantastic Beasts but will be paid his full fee.

Mikkelsen played the villain Le-Chiffre in the 2006 in the James Bond film Casino Royale.