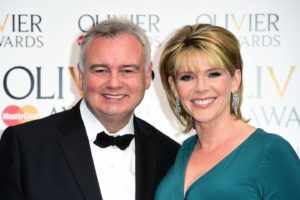 Husband and wife presenting team Eamonn Holmes and Ruth Langford have been axed from This Morning.

The couple has presented the show for 14 years.

They are said to be “furious and upset” by the decision by ITV.

It’s reported they will be replaced by Dermott O’Leary and Alison Hammond.

A show insider told The Mirror:

“It’s time for a change and they are perfect.

“Eamonn is pretty furious and everyone feels for him and Ruth.

“They are well liked on the team, but sometimes tough decisions have to be made.”

Both Holmes and Langford will continue to work on ITV daytime shows.

Last July Dame Carolyn McCall, ITV’s chief executive, said the broadcaster needed a “change in diversity and inclusion on screen by creating more opportunities for those from Black, Asian, minority ethnic and other underrepresented groups”.