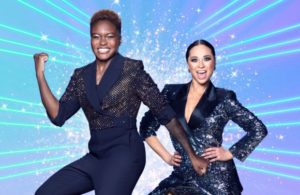 Katya Jones tested positive for the virus after the couple became the show’s first same-sex pairing.

“Hey guys! I’m absolutely devastated my Strictly journey has come to an end so soon.

“I had so much more to give and so many people to win this for!

“But I just want to say a huge thank you to Katya for being the best dance partner anyone could ask for.

“She pushed me way out of my comfort zone and it’s been an incredible experience.

“I’m gutted to be out of the competition but in these unprecedented times and as frustrating as it is, the Covid measures in place are to keep everyone safe, and I’m doing what I can to help.”

Jones said that dancing with Adams has been “an absolute inspiration” and called her “a friend for life”.

The BBC said Jones is asymptomatic.

The couple is self-isolating.

Sadly, following lockdown regulations they will not be allowed to return to compete for the glitterball trophy.