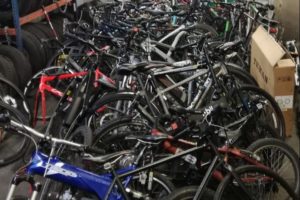 A gang behind a spate of bike thefts has been caught after they “stole” a cycle left out as “bait”.

The specially prepared bike was part of a covert operation by the City of London Police.

It had been secured to a rail.

The thieves sliced through its lock with an angle grinder before making off with the bike.

They were tracked for five miles across London and unwittingly led the police to a treasure chest of stolen bikes.

The police clampdown on bike thefts was launched a month ago.

Since then ten suspects have been arrested and more than 80 bikes have been recovered.

Some have been returned to their owners.

“We know that having a bike stolen can be devastating for cyclists, many of whom cherish their bike and may have spent hundreds, if not thousands of pounds on it.

“With more people cycling into the City, it presents more opportunities for thieves, as they look to target people who have only recently started cycling because of the pandemic and may not know the best ways to secure their bike.

“That said, please be reassured that we take cycle theft very seriously and won’t tolerate it in the City.

“We have had some successes in the past few months as a result of our ongoing efforts, though we won’t let up and will continue to deploy our officers and use specific tactics to combat cycle theft.”